A bit late sharing this but last month we celebrated Evan's 4th birthday. Our little boy is growing so big and so smart with each passing day -- and he always keeps us laughing. Countless times since his birthday he has checked in with us, "Am I still four?" :)

When I began planning the party, I anticipated he'd want a dinosaur theme because of his love of all things dino. However, when I discussed it with him, he shot down that idea & requested dragons.

Dragons?! He had never shown any real interest in dragons. Like zero. I had no clue where he'd come up with that. I waited a couple weeks & asked again and he still wanted dragons, so I scrapped my dinosaur party Pinterest board and began searching for dragon party ideas instead.

Apparently my kid is pretty opinionated. No idea where he got that from! ;) ...He vetoed more than half of my new ideas and made it clear he did not want a medieval theme - just dragons. Big, black, scary dragons. Wellllll this is a kid's party, so I wasn't about to make it too scary, despite this concise request. Fortunately, I got him on board with swords & shields (no other knight stuff though) and fire elements - thus opening up a few more options.

While it wasn't easy coming up with Evan-approved dragon party decor, activities, etc., it eventually fell together and the birthday boy was completely excited about it -- sharing the party plans with anyone who would listen.

I designed this invitation, and after printing them, used my Cricut Explore to cut dragon wings from black cardstock. I then attached the wings to either side of the invites with black brads. (The wings were then able to rotate in over the top of the invitation for mailing purposes.) 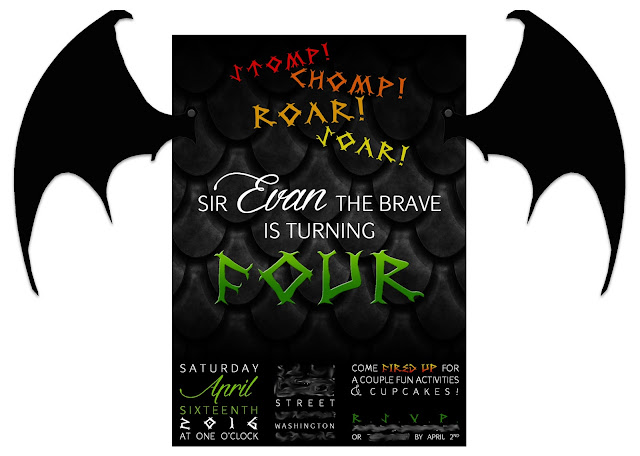 One of his favorite things about the party was the dragon cave we created in our hallway between the living room and his bedroom. 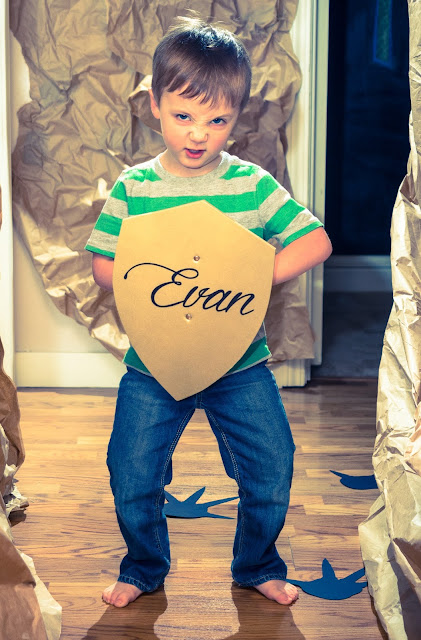 DIY info
We purchased paper drop cloths from Home Depot and wadded them up to add texture. We put rolled pieces of painters tape all over the walls -- spacing the approximately 3" long rolls about 6"-9" apart in each direction. We then lined up the bottom of the paper pieces with the baseboard, and pushed it up against the wall, working from floor to ceiling and allowing some areas to have folds or lumps for more dimension and texture. The paper was also draped across the ceiling of the hallway in order to fully enclose the space. (Openings for each doorway were cut away with scissors.) This was put up the night before the party, so I was nervous the tape wouldn't maintain the weight of the paper throughout the night and for the party itself but we had no problems. It didn't really start pulling away from the wall until the following day.

He was bouncing off the walls (and floors) waiting for the party to start... 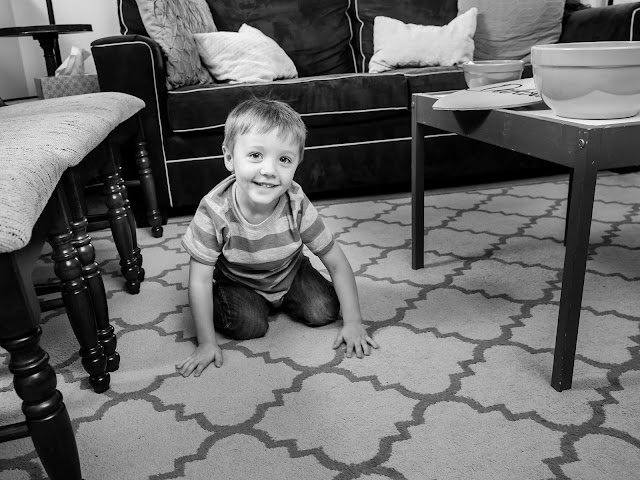 ...but then people began arriving and he retreated into his shell of shyness. :/


I had planned a couple activities for the kids to do. We kept the party mostly family but also invited four child guests. I wanted to ensure the activities would be quick, as kids in this age range aren't known for having long attention spans, and simple enough for all of them - including a couple younger ones - to participate in.

As guests were arriving, we had the kids decorate shields. 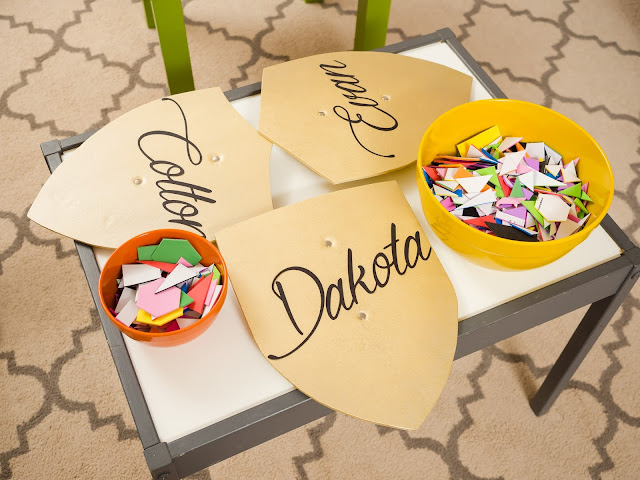 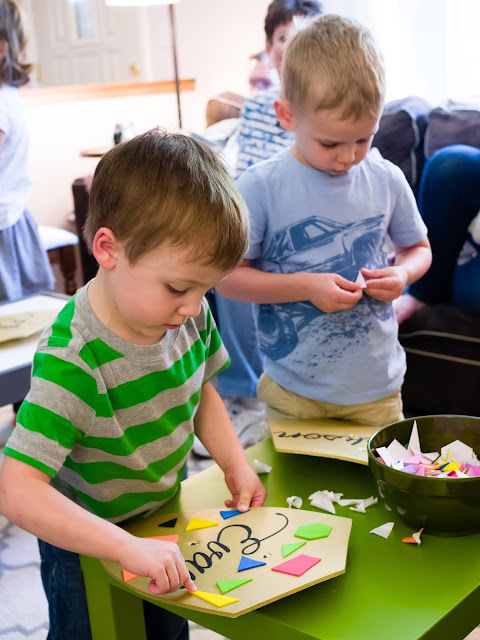 DIY info
I printed and cut a different shield shape template for each child, then traced them onto foam poster board from the Dollar Store. After cutting the boards with box cutter, the shields were spray painted gold, and my husband used some of his leather scraps and supplies to attach handles to the backs. I used the Cricut Explore again to cut the kids' names from black cardstock & adhered them to the fronts. The kids then used self-adhesive foam shapes to embellish them.

Once their shields were decorated, they snagged a sword and muslin bag, then set off on a dragon egg hunt. These items all served as party favors.

DIY info
I constructed dragon nests by stapling inside out brown paper shopping bags over and around paper plates. Each nest held one magical egg per child. I assigned a color to each kid by using coordinating embroidery floss to monogram their muslin bags, which they collected their eggs in. This ensured equal distribution of the prizes! The eggs contained: individual snack packs of goldfish crackers (dragon food!), glow-in-the-dark dragon tattoos, glitter dragon stickers, and "dragon" googly eye finger puppets / rings. The nests were placed throughout our house, and each had a different style of dragon footprints (from black cardstock) leading up to it.

After they had discovered the eggs, we enjoyed "fire" cupcakes and beverages (including dragonfruit VitaminWater, of course!). 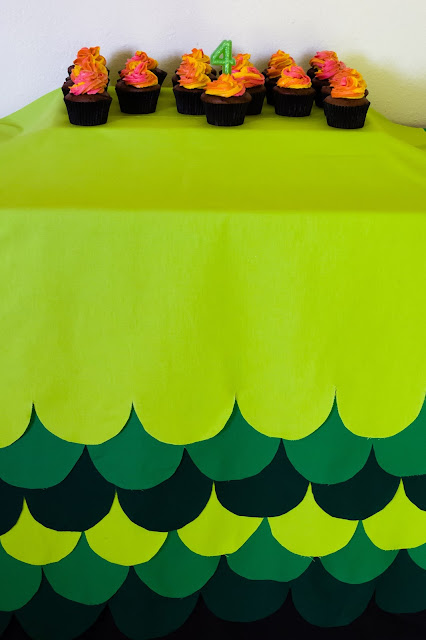 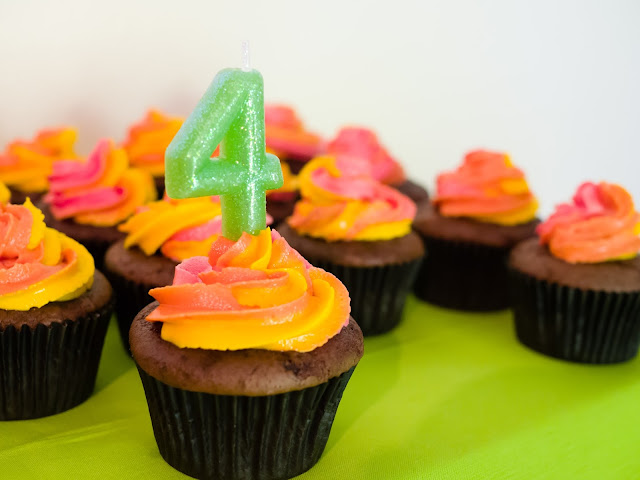 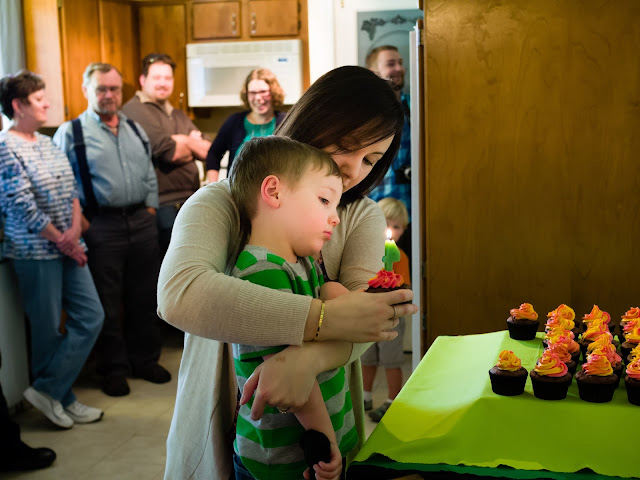 Poor kiddo... He still didn't want anyone looking at him nor was he willing to blow out his candle because it meant more attention on him.

At least all the other kids were having a blast, and we finally managed to get him warmed up while opening presents... If only we had started with that! :) 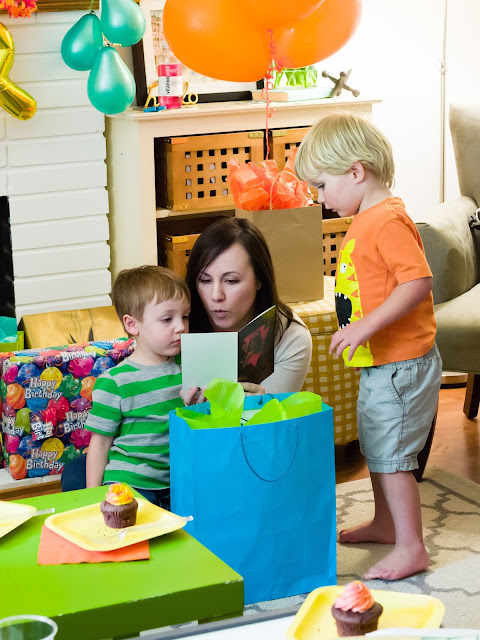 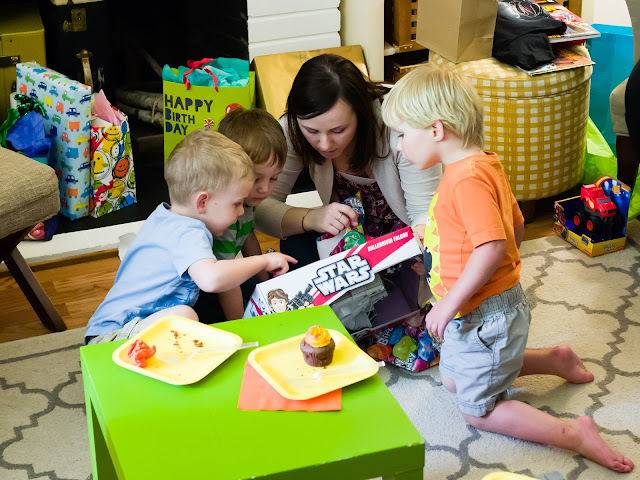 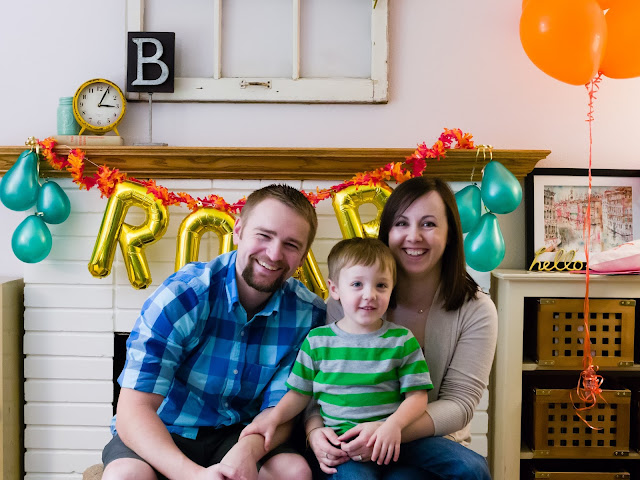 Pretty sure it was a roaring good time for all, even with the people-are-looking-at-me parts!

I am a participant in the Amazon Services LLC Associates Program, an affiliate advertising program designed to provide a means for sites to earn advertising fees by advertising and linking to amazon.com.  This blog also contains some advertising and affiliate links through ShopStyle Collective, for which I may receive a small commission if you click on a link to certain products in a post.
No comments:

A few days ago, I was driving Evan home from daycare. On the way, we first passed the high school, then the elementary school he will someday attend. I pointed each out to him and was explaining how old he will be when he starts attending these.

He was quiet for a moment after the elementary school went by -- where he'll be starting kindergarten in 2017 -- then I heard him pipe up from the back seat, ever so sweetly:

"Will you still be my mom?"

Apparently, he was under the impression that because he would grow older and eventually no longer attend the same daycare/preschool, this somehow meant he also would no longer have me as his mother. Bless his confused little heart!

He may challenge me regularly with attitude, disobedience, etc. (and no doubt will continue to do so for years to come) but I find comfort and delight in these heaven-sent reminders that, at the core, is a boy who truly loves his mommy through it all.

The huge grin that stretched across his face when I promised that he is forever my son and I am always his mama was truly the best thing ever.

Wishing a happy Mother's Day to all you incredible, hard-working, beautiful moms out there - with children young or grown, and especially those with angel babies... Know that you each are so very special and worthy of celebration every day!
No comments:

The past two months have been quiet around here. This is because things have not been quiet elsewhere in my life.

I have this bad habit of overcommitting to things. As I've gotten older, I have actually become better at setting limits and saying 'no' but it's still something I struggle with. I'm completely Type A, so I want to be able to do everything. Problem is -- I can't. I am human and there are only 24 hours in a day. (Why is it sooo difficult to remember that?!)

No matter how hard I try, cramming 30 hours of stuff into 24 hours does not work. Juggling a full-time job, family, Etsy business, independent design work, etc. has left little to no time for the extras I want to include in my life. Things that overlap into what would be the margins simply have to get cut at times... thus my absence from the blog lately.

I am fortunate to have a husband who notices when I'm about to get in over my head & tries to bring me back to reality before it's too late. Sometimes I listen. Sometimes I don't. Unfortunately, I recently ignored his voice of reason, and am now paying the price. :/  The past couple weeks have been especially busy, and I've still got 2-4 more to go before I'll be in the clear.

I miss having time to share on here. Obviously, there's a lot I've been up to, so there is much I want to show and tell. You can subscribe (at right) to follow along & ensure you'll know as soon as things get back to "normal" or check in over the next few weeks. I promise I'll be back, and plan to work harder to set those limits in my life and stop cutting my margins.

In case you need this reminder too... 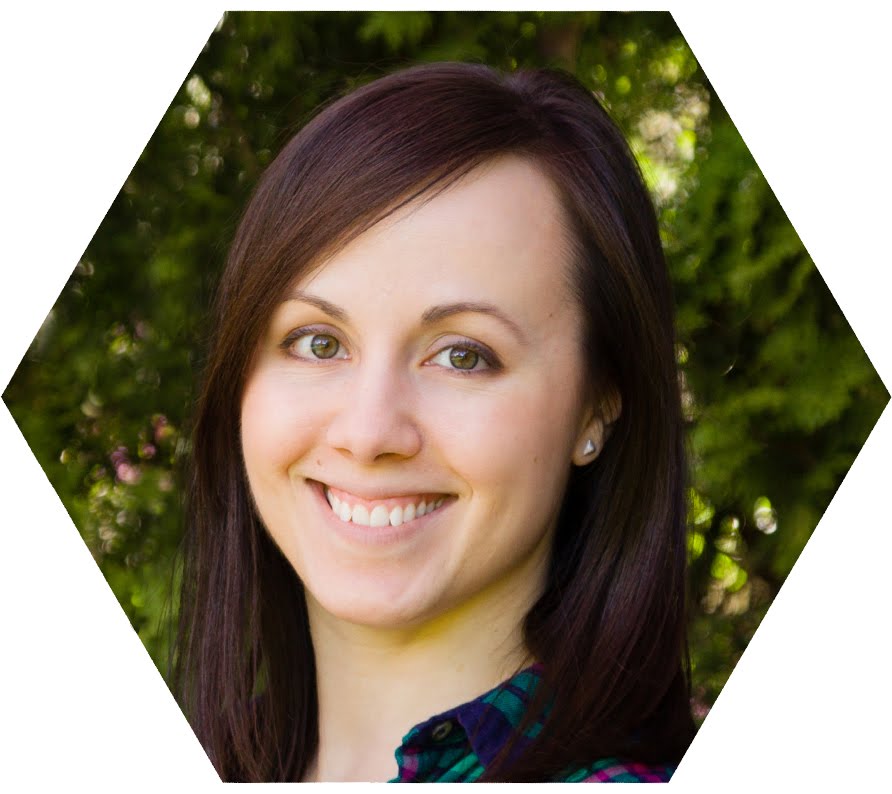 My name is Amy. I like to craft, create, design, and decorate. I love the two blonde-haired, blue-eyed guys in my life. My heart is full!

Drop me a line.

I am a participant in the Amazon Services LLC Associates Program, an affiliate advertising program designed to provide a means for sites to earn advertising fees by advertising and linking to Amazon.com. This blog also contains some advertising and affiliate links through ShopStyle Collective, for which I may receive a small commission if you click on a link to certain products in a post.